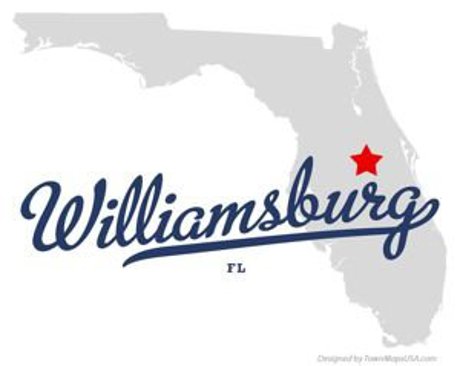 Residents of Williamsburg not only enjoy community pools, tennis courts and clubhouses, but step just outside the community and you have the Sea World Orlando Parks including Discovery Cove and Aquatica. Not only is Sea World just outside the neighborhood, but so are all the shops, restaurants, attractions of International Drive.  Universal Studios Florida is just up the street in one direction and the Walt Disney World Resort is a few miles away in the other direction.  Add in the massive Orlando/Orange County Convention Center and Williamsburg is an ideal neighborhood for those who work in the attractions area or who just like to be close to all the fun! 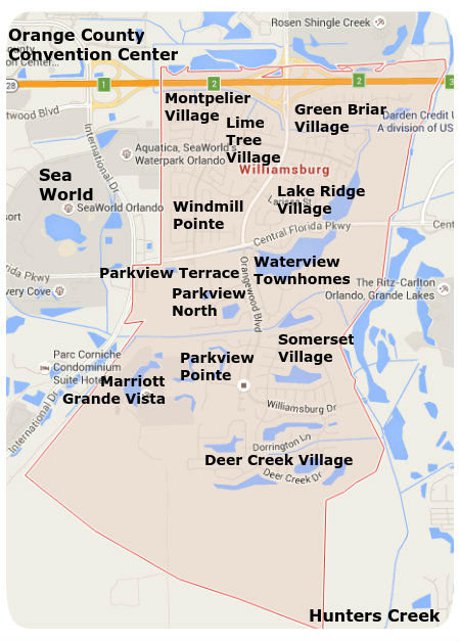 Where is Williamsburg in Orlando Florida?

Williamsburg is a large community near the tourist areas of Orlando. It is bounded on the North by the Beachline Expressway, on the South and East by Shingle Creek and on the west by International Drive. Universal Blvd becomes Orangewood once the road crosses the Beachline and enters Williamsburg and continues to the Southern end of Williamsburg. Central Florida Parkway runs East to West through the community linking it to I4 to one side and Orange Blossom Trail to the other. Williamsburg is not only close to Sea World, Walt Disney World and Universal Studios, but the neighborhoods of Dr Phillips and Hunters Creek are also nearby.

Homes found throughout Williamsburg were built through the 1960s and into the 2000s. There are no new construction opportunities left here, but some of the older homes have been renovated since they were first built.

The community consists of seven different villages. Each provides something a bit unique and there is a mixture of townhomes and single-family properties here. Williamsburg real estate can range from a modest single-family home to a luxurious custom estate.

Green Briar, Lake Ridge, and Lime Tree are the three most popular villages in Williamsburg. These three villages often offer the most homes for sale throughout the area. Homes will have three bedrooms or more with many offering three, four, or five bedrooms.

The townhomes are found in the Waterview Townhomes village of Williamsburg. Each townhome offers three bedrooms and two bathrooms with plenty of living space. Some offer enclosed patios, as well.

Things to Do in Williamsburg 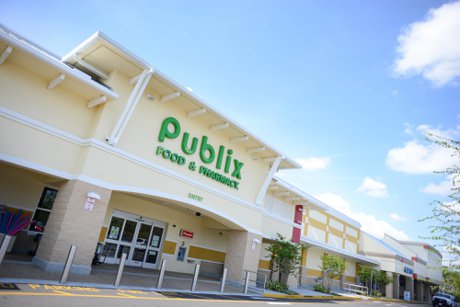 Some of the most popular theme parks in Florida are found just minutes from Williamsburg. Residents can easily enjoy SeaWorld Orlando, Universal Studios, and Walt Disney World with annual or day passes. In addition, the location gives residents access to some of the best shopping and dining in the Orlando area.

Disney Springs offers a large outdoor mall with plenty of shopping, dining, and entertainment. It's home to a Dine-In AMC theater, a bowling alley, plenty of restaurants and bars, and some of the best shops found within the area.

Williamsburg is also found close to the very popular I-Drive, which offers all kinds of entertainment and dining. Shoppers will also be happy to know the Orlando International Premium Outlets are found just a short drive from the community.

While the theme parks may be the biggest attractions in the area, Williamsburg is also close to some of the best golf courses and lakes in the Orlando area. Big Sand Lake, Spring Lake, and several others are found nearby. Golfers will enjoy incredible resort golf courses including the Lake Buena Vista Golf Course, The Ritz-Carlton Golf Club, Shingle Creek Golf Course, Orange Tree Golf Club, Hawk's Landing Golf Club, Falcon's Fire Golf Course, Celebration Golf Club, and many more.

DON’T MISS THE OPPORTUNITY to own this remodeled and very well maintained property. Located on an oversized lot on a beautiful cul-de-sac, this 3 Bedroom 2 Bathroom home ...

Enjoy the beautiful sunrise over this Lake View home. Often you can see spectacular viewings of fireworks offered by the home’s proximity to resorts and theme parks right... 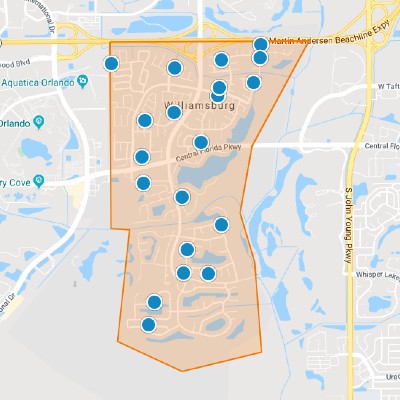