The search is over, this is the ultimate dream home! Nothing can beat this stunning house of a lifetime! Located in Hunter’s Creek, the 21st best place to live in the USA...

If you want a luxury home, look no further than this beautiful home! This magical home is in Hunter's Creek, one of the best locations to live in the United States! Hunte...

Spectacular waterfront pool home offering a split plan of 5 spacious bedrooms and 4.5 baths with a circular driveway and an attached 3-car garage on the side of the house...

There is a mandatory HOA for Hunter's Isle which includes the following amenities:

Where is Hunter's Isle in Hunters Creek?

Hunter's Isle is located in the 32837 zip code on the West side of Hunters Creek.

What's Around & Near Hunter's Isle?

Hunter's Isle included home features below are common but may vary from home to home: 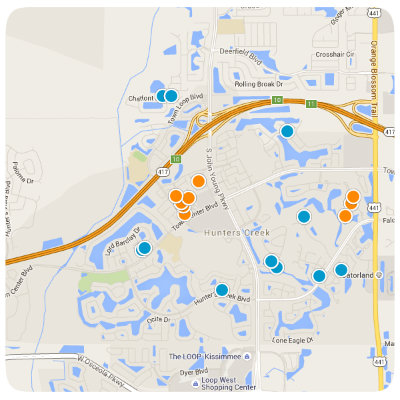