A city well-known for the antique stores, Dade City is found in Pasco County. It's a popular place for visitors during the annual Kumquat Festival and throughout the year for shopping, dining, and historic architecture. If you're looking for a unique community to call home, Dade City might be just right for you.

Those seeking an area filled with amazing shopping near Tampa will enjoy Dade City. It's found close to several outdoor shopping centers and luxurious malls. Plenty of smaller boutique shopping options are also found here. Living in Dade City offers access to some of the best shopping and dining in the area.

Where is Dade City?

Bushnell is found just 22 miles away, while Zephyrhills is just 9.6 miles away. This unique location allows residents to enjoy the Tampa and Orlando area. Downtown Orlando is about 63 miles from Dade City.

Homes for Sale in Dade City

Dade City offers many homes for sale. Some homes for sale come with acreage and can range from smaller homes to luxurious estates. If you're looking for a home with plenty of outdoor space near Tampa, Dade City is a good option.

The community also offers some golf course homes throughout. Most of the homes in golf course communities offer two to five bedrooms with large backyards. It's common to find floor plans with lots of living space and some of these homes offer swimming pools, too.

One of the popular communities in Dade City is called Baymont. This community offers a country feel with plenty of things to do nearby with downtown Dade City within walking distance. Some of the homes here are new construction homes for sale in Dade County with luxurious upgrades.

Another popular community in Dade County is called Lake Jovita. This community offers some newly built homes with three to four bedrooms. It's a great location with plenty of golf courses found nearby.

Things to Do in Dade City

Dade City offers some of the best dining in the downtown area, along with great shopping centers. It's known for antique shopping options and the historic architectures found throughout. Visitors come to Dade County to see the architecture of the Edwinola, Pasco County Courthouse, and Hugh Embry Library.

The community is also known for several events throughout the year including the Kumquat Festival, which attracts plenty of visitors every year. Many wonderful golf courses are also found throughout the area.

If you prefer a community with more space and a great location to enjoy the Tampa and Orlando area, Dade City might be just right for you.

Come on up to High Country--- Sitting at 210’ elevation this property is a dream come true. Lovely LARGE OAKS scattered about the improved pasture that is currently home ...

Soak in the tranquil lake views from this elegant, custom-built, lakefront, 7,557 sq.ft., pool home, on over half an acre in The Estates of Lake Jovita. From the infinit...

Looking for privacy, seclusion, and space from neighbors?? Then you will love the location and setting of this custom brick home on 60 acres of rolling scenic hills in Da...

Grand elegance exudes throughout every inch of this stunning, custom built masterpiece. 4 bedrooms, 5 bathrooms and a 4 car garage are just the beginning to what this bea...

Situated on a beautiful hill overlooking Suwannee Lake is this beautiful custom built home on 3 acres. This home will take your breath away! With grand 8' tall doors and ...

Stunning, custom-built Mid-Century modern gem in the heart of Dade City’s rolling hills with some of the best sunsets you’ll ever see. Classic features found in this 4 be...

HOMES ARE NOT HABITABLE. You will get impact fee credits. If you are a handy man and love history, you may want to rehab the 2 homes on site. Built in the early 1900's. B...

Escape the hustle and bustle of the city but stay conveniently close. You'll immediately start feeling relaxed as you pass through the gated entry and travel down the 1,0...

HISTORICAL HAVEN & Architectural Masterpiece in Dade City awaits its future Legacy! Once in a lifetime opportunity to pass the torch of this Magnificent Historic Home bui...

ENJOY COUNTRY LIFESTYLE LIVING AMONG THE ROLLING HILS OF THE DESIRABLE AREA OF BLANTON, FL. 10 PRIME ACRES OF LUSH GRASS, FULLY FENCED AND CROSS FENCED WITH 4 BOARD FEN...

This is a rare find and just outside of Downtown Dade City! Bring your horses to this over 10 acres of picturesque land tucked away off of the road with a beautiful 5 bed...

A BEAUTIFUL TEN-ACRE FARMLAND AND HOME WAS BUILT IN 1930. ROLLING HILL VIEWS AND MANY BEAUTIFUL TREES SURROUNDING THE PROPERTY, WITH A VIEW OF MIRROR LAKE FROM THE BACK P...

SOUTHERN CHARM: This 4 bedroom,3 1/2 bath, 3 car garage home is the ultimate home of quality and charm. The minute you walk in you feel the quiet from the hustle and bust...

**Improved Price** Must see this stunning 4/3/3 custom 2 story Mediterranean home in the rolling hills of Blanton! The home rests on 1.3 acres, so you'll have plenty of r...

Imagine waking each morning and experiencing views that make you feel as though you are in the hills of Tuscany!! This custom built estate home offers rare magnificent vi...

Beautiful home on large 3.25 acre lot that can be subdivided for developing into many homes if needed. Also has 2 out buildings that can be rented as dwellings 2 Brand ne...

Pre-Construction. To be built. 4/3/2 split floor plan home! Kitchen has tall upper cabinets with crown molding, a breakfast bar, appliances and more. Your inside laundry ...

LIVE like you are on VACATION everyday in this Lake Jovita CABANA Style Home...READY for you! Lush TROPICAL LANDSCAPING welcomes as you Enter thru double doors to your o...

Under Construction. UNDER CONSTRUCTION- TO BE BUILT AND COMPLETE IN FALL 2021. PHOTOS ARE OF A FINISHED MODEL 2265. LARGE LOT! NO CDD! This is a spacious four-bedroom, th...

Custom Dade City Charmer! 3 bedrooms 2.5 baths with large detached garage and large bonus room upstairs . If you need a place to work at home or a place for hobbies, this...

Awesome neighborhood with only 76 homes, NO CDD fees, and HOA that includes yard maintenance giving you more time to enjoy this almost new home located in Lake Jovita's n...

One or more photo(s) has been virtually staged. Under Construction. Builder offering buyers up to $10,000 toward closing costs with use of preferred lender & title. We...

Up for sale is this beautifully upgraded property, located just a few hundred yards from the buzzling city of Dade City, FL. Conveniently close to shopping, dining, med...

Under Construction. Builder offering buyers up to $10,000 toward closing costs with use of preferred lender & title. We are offering our move-in ready Express Series...

Short Sale. *****SHORT SALE*****price set by sellers lender. (Fannie Mae) In the heart of Dade City this 3 bedroom 2 bath home has so much potential. There is signific...

Short Sale. Convenient located near HWY 98 this 3BR/3BA Home on a corner lot with a large fenced backyard. Large master suite split from other bedrooms, family room has ...

FULLY RENOVATED HOME!!! Inside features an open floor plan with kitchen having all new beautiful cabinets and GRANITE counter tops. The flooring throughout the home inclu...

INVESTOR SPECIAL! With some TLC this can be the perfect investment property. Over 1/4 of an acre (0.31 acres) in lot space which means a big backyard with plenty of room ...

Investment property or for someone looking for a lot that's off the main road. Value is in land, house requires complete rehab or tear down for a new home. This sale ... 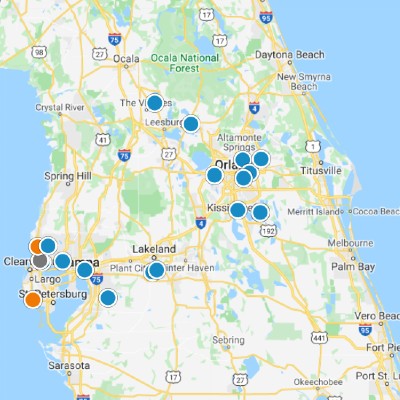